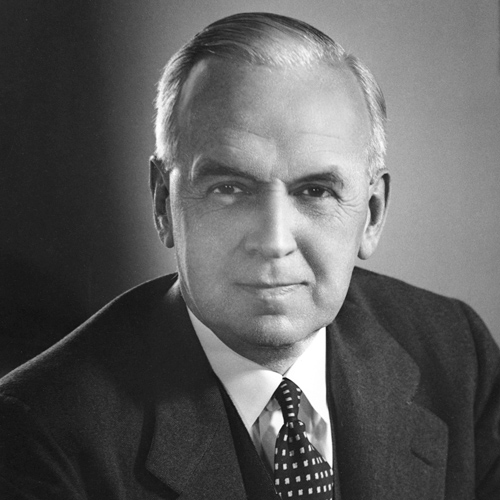 Edmund Ezra Day became the fifth president of Cornell in 1937 and later led the university through the turbulent years of World War II and its boom years afterward. During his presidency, academic programs were revised and expanded. A Department of Sociology and Anthropology and a Department of Slavic Language and Literature were created. Area studies were initiated in 1943 with a course in Contemporary Russian Civilization.

The central event of Day’s presidency was World War II. The Army A-12 and Navy V-12 programs began in 1943. The College of Engineering created the Engineering, Science, and Management War Training Program for the war industry, training some 30,000 persons, and a one-year program for the industrial training of women. The Medical College sponsored the Army’s Hospital No. 9 on Biak Island off the coast of New Guinea.

After the war, the campus developed rapidly, with record enrollment, which grew from 6,341 to 10,034. Cornell’s Laboratory of Nuclear Studies quickly developed into one of the world’s leading centers of research in experimental particle physics. A new School of Business and Public Administration began operation in 1946. The Cornell Aeronautical Laboratory, a research lab in Buffalo, was acquired by the university. In 1948 the State University of New York was formally established. Cornell’s state colleges were defined as state supported but not state operated. On May 15, 1944, a bill establishing the New York State School of Industrial and Labor Relations was passed and signed; the school opened on November 1, 1945. Day’s achievements also included administrative reform and the success of the Greater Cornell Fund.

Born in Manchester, New Hampshire, in 1883, Day received B.S. and M.A. degrees from Dartmouth College and a Ph.D. in economics from Harvard University.

Day resigned the presidency in 1949 because of ill health. He was appointed to the post of chancellor, giving his energies to the major overall aspects of university development, to the higher levels of fund raising, and to the cultivation of the university’s relations with the state. He also continued to serve as the chief executive officer of the Medical College.